Since October I have been fishing whenever the weather has been ok, which this year has seen very obliging, hardly any big lows and no real rain to talk about, so lots of fishing days in a row,    The last seven days from the 7th of Dec to the 13th has been great weather wise, with a change promised at the end of the week. So the 7th I head to a small lake I know, not far from home, most of the lakes I fish are within 10 miles of my house in and around the Fenagh Ballinamore area, there are about 28 lakes within a 5 mile radius so we are very blessed by the fishing Gods to live here. So I head off at 7/30 on a Saturday,the light is only starting to brighten at 8 these days, so there’s  not    much point fumbling around in the dark, as things only get trod on or lost,even with  a  good torch. I did fish this venue from the bank a few days earlier testing the new batteries on my bait boat but going in my lake boat, Just in case the batteries went flat mid lake so I  could  retrieve the boat if all goes wrong, I took a friend along with me this day and told him about all the great pike I have seen in my boat over  the   years in this swim, yawn yawn,  I had one  bite all day a good 150/200ft from the shore as I wanted to test the batteries to the max, she felt like a bag of coal with the odd knock knock, I wasn’t sure if it was a big fish as it was so far out, but  as it came to the bank it made its first turn and run and I had my clutch a little too tight and the hooks popped out . So this time I am on my own and set up my rods  float style, set the stop knots at the right depth and wait. About 1 hour in,my first tentative bite  the  float twitches,  I twitch the float stands up,    I stand up, wondering if it could be the fish I had on two days earlier, she’s heavy 20lb 4oz to b exact not a great fight but I’m delighted then 2 dropped runs before 2,  9lb fish and a 13 to finish the day.I rang my friend to rub it in as he said that he didn’t rate the swim very much,    Most lakes hold good fish but you need the luck to be there on the right day, this was the right day, 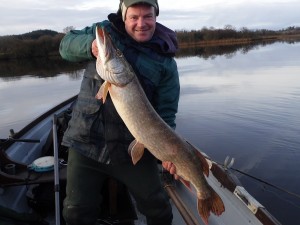 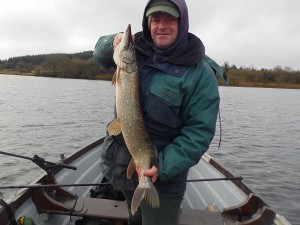 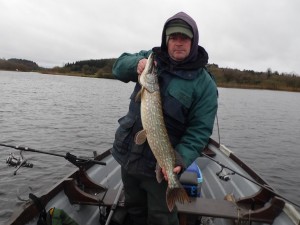 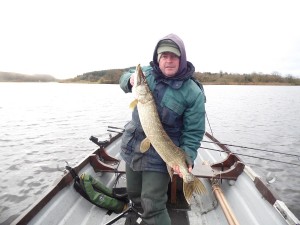 The next day we   headed to a small landlocked lake with my bait boat all tested and ship shape,the weather was blowing a bit and drizzling but ok as we had shelter, a little walk down a couple of fields just to warm us up, we put up 2 rods in close and were going to use the bait boat to drop the other 2 rods in deeper water out a good distance,4 or 5 minutes had passed when the first float popped up and I said to  lenny that’s yours hopping it wasn’t going to be a monster,  a 4 lb fish but with an old bite mark,quite a long fish, with a big head so we assumed it must have survived a savage attack and must have weighed maybe 6/7lb,  Sometimes when you get a fish so quick its not a good omen as that can be it for the day, but not this day, Lenny had to find a lover for his goat and had to leave me on my own, and that was the first bit of luck as 8 fish came to the baits over the next 4 hours with at least 7/10 float attacks with one swimming off with a pencil float for 5 minutes,when we popped up a bait and caught a small jack that was the end of the float nonsense,  some 3/4 fish in and around the  6/7lb mark had bite marks on them telling us that the big girls had been active in the lake, The 2 bigger fish came in at 10lb and 12lb with most averaging 6/7lb. 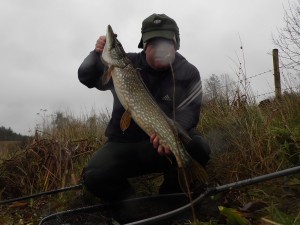 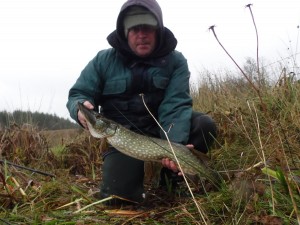 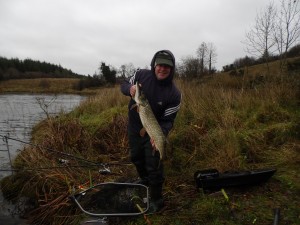 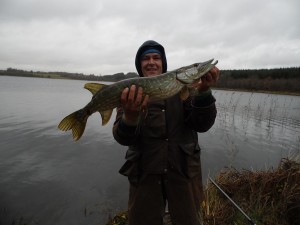 Now onto Monday, a local reporter wanted to write a report on static dead baiting and asked if I would take him out, how could I refuse.  but after the weekends fishing I was not hoping for that much action as good runs always run out, so picked him up in morning and headed off, conditions weren’t great with a fair amount of wind on the lake in question but off we went anyway, firstly I located the deep section of the lake and pointed the boat into the wind and dropped the front anchor and waited for it to bite before dropping the second one, and then started to explain how I static dead bait, first looking for bait fish in the deeper water then anchoring on the drop off, I set up the first of two rods using a stop knot type sliding float tactic, leaving the bait on the bottom of the lake some 20ft down, cast the first rod in then the second, after about 5 minutes I started to describe the action of the float in the waves and that the bobbing action was not a bite but if the float went rigid, and like magic it did, and then said the waves and wind could possibly do that but if it disappeared under, and it duly did, it was time to take notice, I said look at the line tighten and watch the bait runner which started to take line were in , grab that rod and lift, 10 minutes later and a 20lb 06oz fish was in the boat took pictures placed her back in the water, with that the second float disappeared , and another 10 minutes the second fish a 13lb fish was in the boat, I turned around and said and that’s how you static dead bait.    As we all know it doesn’t happen like that too often, but normally hours and sometimes days before even a bite,  By now the wind was having a real party with us and the anchors started slipping so we had to move but with no let up and the wind getting stronger we decided not to make the news for the wrong reasons and headed for shore,  I have a sneaky feeling it could have been a great day if we could have stayed but you can always go back, 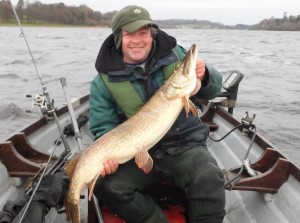 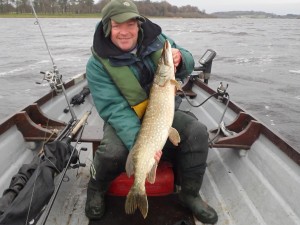 Next up Tuesday I head to a local well known trout lake Laura/Rowan, this lake holds some nice pike but this lake is my nemesis where I struggle to get even a bite, as others seem to have no trouble but that’s fishing and yes I blanked, no pictures, no story,

Then Wednesday  a friend took me too a small lake where he had lots of pike interest during the summer, when fishing for silver fish, I always like a new venue as I get that feeling of anticipation or stomach cramps, this time it was stomach cramps and I had too head to the bushes, with that done we put the baits out into the deep water using the bait boat and waited and waited and more waiting, finally a bite the alarm started to sing , I lifted the rod wound in and nothing, I felt my heart sink, it was late afternoon and I just knew it was a one bite day and it was, should I have left it ?? Phil said get over it !! and I did.

Thursday I took Phil to a lake I fished Sunday, and met Lee there at 8 in the morning we all rigged up, putting baits out, some casting most using the bait boat, and it started left right, left right, all day, I had picked the middle swim I kept making excuse’s the fish are going anticlockwise the fish are going clockwise, 9 fish in total 5 one side 4 the other and dropped runs all day and not a bite in the middle, I was very busy though netting and un hooking for them bsards, it was like having a Cheshire cat either side, big cheesy grins all day. most of the fish were in the 10lb range and lots of bite marks again so going to head back soon as the average size of fish was bigger than earlier I the week. 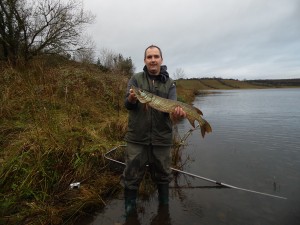 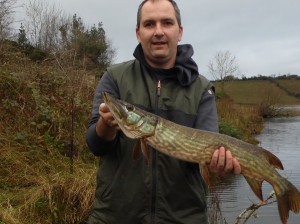 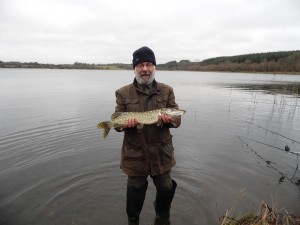 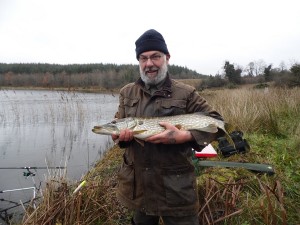 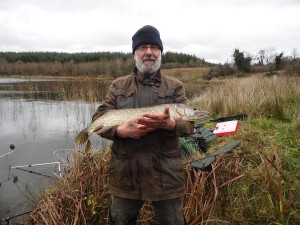 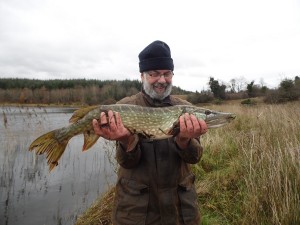 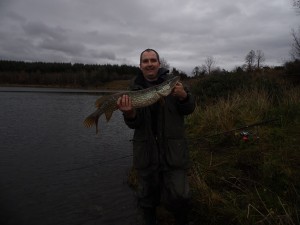 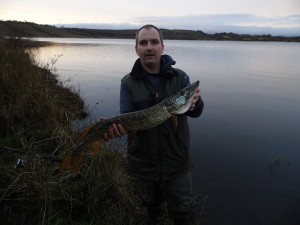 Finally Friday and onto a river swim with Phil, the wind conditions were horrible but we had good shelter and was glad not to be on a boat, we just used floats with a stop knot tactic as we only had to cast 20ft, it started off quite quick with a small jack for  Phil ,picking up where he had left of the previous day, so I was glad to hit a 10lb fish soon after,  we were having quite a few dropped runs, and the fish never touched a big bait and only took small roach and even then didn’t devour then, so not really on, we ended the week with 5 fish on Friday the best was a 12 and a 10 with 3 small jacks. as I speak, I am not sure of next week as new tyres for the van needed, and other things  going to slow me down, there’s a big low today and Sunday, A nice time to recharge my batteries, as I am knackered, hope you enjoyed my article, I turned off comments as I had a spam attach last week and had to delete 2330 comments 20 at a time, Tight Lines and have  good Christmas and new year Dave. 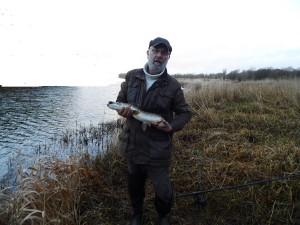